Yesterday was a good day.  I had my second post-op appointment.  It went very well.  Everything looks like it’s healing properly which was music to my hypochondriac ears.  The surgeon then got to the topic of my weight loss.  Thankfully, he was not of those surgeons that pushes Weight Loss Surgery.  He easily could have done the whole lap-band while he was taking the gallbladder out but it was not something he even brought up.  I don’t know if it’s because since day one, I told him I’ve been doing Weight Watchers but he just didn’t bring it up.

I told him how six days after surgery, I lost 7 lbs.  Then the following week, I had gained back 1.4.  Oddly, I wasn’t upset by it.  I knew that after a super big loss, I tend to gain a little the next week.  He agreed that the gain was good.  He reminded me that the loss was an unhealthy loss and that I should gain a little back and then start losing again.  By a little, I think tonight’s .2 gain was in line with that. 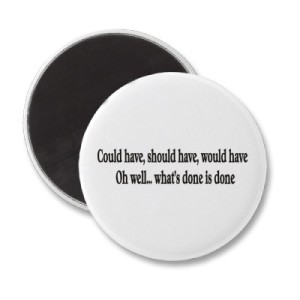 I did not feel badly about my gain tonight.   I know that I have one more week of mild activity before I ramp it up.  I am counting the days!

Tonight though, I did have the points plus left over and really all summer had been dying to have some fish and chips.  I was a little nervous to eat it because it’s fried and I had heard that for some people the fried foods didn’t really work very well after having the gallbladder removed.  It smelled delicious.

It was a really big moment for me.  What if everything I have gone so long without eating no longer is good to me.  Would that be a bad thing?  Probably not.  Would I be missing anything?  No.  Will I gain weight back if I go back to eating those foods like I did before?  Most likely.

After this little brain storm this evening, I am understanding more.  I am realizing that I am slowly making the changes I need to make in order to make this a lasting lifestyle.  It’s slow but it’s progress.

A blog full of humorous and poignant observations.

I see the world in color, but at night I dream in ink

Thought Catalog is a digital youth culture magazine dedicated to your stories and ideas.

A String of Pearls

The Comedy Behind Life

Because keeping life's lessons to yourself is just selfish.

Creative humour, satire and other bad ideas by Ross Murray, an author living in the Eastern Townships of Quebec, Canada. Is it truth or fiction? Only his hairdresser knows for sure.

A Day in the Life of Shareen A.